I never heard of his name before, Samih Al-Bahra. I guess that’s what it means to leave Damascus; you hear of new detainees, new faces, for the ones you already know are almost outside now – they too left Damascus.

I received a message on my Facebook couple of days ago from a close friend asking me to blog about the detention of Samih Al-Bahra who was detained on April 30th 2013. My friend was very worried, she knows of many friends who were detained then got severely tortured, some of them were tortured to death. Like my colleague at the Syrian Center for Media and Freedom of Expression, Ayham Ghazzoul, a medical student who was detained in campus, tortured in campus, then brought to Air Force Intelligence‘s cell injured, and was left there to die in four days without being hospitalized. Ayham died in the arms of his cell-mate, who told us the story once he was released. That’s how you know of a detainee’s story in Syria, and that’s how you know of martyr’s story. Closure, is not exactly what you get, but something close to it.

I don’t know Samih, but I know Assad regime that arbitrary detains people, whether they’re activists or not, torture them and many times to death, hold them incommunicado, for months, a year, two years (if we’re only talking about the revolution).

I don’t know Samih but I know that any detainee in Syria is a risk of torture and death.

I know that Ayham Ghazzoul was brutally murdered by the Syrian state in a governmental institution.

Ayham Azzam Rajeh, who was a student at Pharmacy college, died under torture in May 2nd 2013.

Ali Shidad Haj Omar, was a detainee in Tudmor prison, killed under torture in May.

Bassel Mahmoud Rashid, from Nabek village, was a detainee and killed under torture in April 11th 2013. He was his parent’s only child. 21 years old.

The list goes on. I wish I can say it doesn’t. As someone who was detained, I know that we can save a detainee’s life once we mention their names on our stupid online accounts; twitter, blogs, Facebook. Can you imagine? You can save a human life by just a click and a few words? It’s media, it’s letting the regime know we can beat it together. It’s humanizing a detainee who’s becoming a number.

Write for Samih, write for every detainee. You might be saving their lives.

I’ll be updating this post as soon as I get further information about Samih.

Thank you all for the kind words, but the award goes to Syria!

Below is my statement that my colleague at the Syrian Center for Media and Freedom of Expression, Dlshad Othman, read at the ceremony yesterday:

Last night, there were many explosions heard in the city of Damascus, gun shots heard in my neighborhood, it has become the norm to fall asleep when hearing clashes in my neighborhood. We spent the night watching footage of a new massacre in Qubair, Hama, that followed Houla massacre couple of weeks ago.

I am writing this to tell you that it’s not easy to write a simple speech for such a kind and humbling event when all this is happening in your day. Then I figured, writing what prevents you from writing, paves the way for you to write.

Beautiful friend, Bassel Shehada, martyred by a mortar grenade in Homs on 28-5-2012. In this photo he was training activists in Homs on how to use the camera to cover regime violations of human rights. Bassel Left Fulbright scholarship to study film-making in the US and chose to be in Syria at this “historical moment,” as he once told me.

END_OF_DOCUMENT_TOKEN_TO_BE_REPLACED

As you might have heard, the office in which I work at was raided by Air Force security branch on Thursday 16-2-2012. My boss, friend and mentor, Mazen Darwich, along with 8 male colleagues and friends, are still in detention since that day at air  force security branch, known to be the worst security branch in Syria.

I spent only 3 nights there along with five other female colleagues, those three nights were the longest hours of my life. You know that I was detained previously for two weeks, which was my first experience with detention, but those 3 nights at air security branch were the worst in comparison to my previous detention.

Below is SCM statement with regards to the raid and the arrest of our male colleagues, please share it with whomever you think might be helpful in getting the word out around the world. 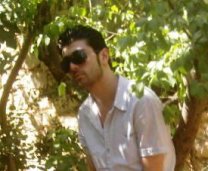 In a new escalation against freedom of expression and media work in Syria, the Office of the Syrian Center for Media and Freedom of Expression (SCM) in Damascus was raided on Thursday 16 February at approximately one and a half PM by agents of the Air Intelligence Intelligence (Mazzeh branch). The raid, that was carried out by members of the security apparatus along with a group of armed men, who caused panic and fear among employees and visitors of the center, especially since the officer in charge did not disclose the arrest or search warrants that are supposed to be issued by a public prosecutor.

The security forces took the IDs of SCM employees and visitors in addition to their mobile phones. They were prevented from proceeding their work and were asked to gather in one room until 4 PM; they were transferred to the Air force Intelligence detention center of Mazzeh then.

Following are the names of staff and administrators who have been arrested that day:

1 – Mazen Darwish, director of the Syrian Center for Media and Freedom of expression.

2 – Yara Badr, Syrian journalist and the wife of Mazen Darwish.

4 – Sana Zitani, a graduate of the Faculty of Sociology and wife Hani Zitani.

5 – Abdel Rahman Hamada, student at the Institute of Accounting.

6 – Hussein Gharir, graduate at the Faculty of Information Engineering.

8 – Joan Fersso, a graduate of the Faculty of Arabic literature.

9 – Mayada Khalil, graduate at the University of archaeology in Aleppo.

11 – Bassam Al-Ahmed, a graduate of the Faculty of Arabic literature.

Shady Yazbek, our visitor, he was detained as well just because he was at the office.

Female employees working at the center were released on Saturday 18 Feb 2012 around 10 PM (Yara Badr – Sanaa Mohsen – Mayada Khalil – Razan Ghazzawi) in addition to the visitor Hanadi Zahlout on one condition that at they are to show up at Air force Security every day from 9AM to 2PM for further investigation until unspecified date. Rita Dayoub was released.

The Syrian Center for Media and Freedom of Expression strongly condemns the raid conducted against its office as well as the ongoing arbitrary detention of the journalist Mazen Darwish and its staff. SCM expresses its deepest concern regarding the fate of persons remaining in detention, demands the Syrian authorities to release all detainees immediately and unconditionally, and holds the Syrian authorities fully responsible of the psychological and physical conditions of the detainees.

The center calls upon the Syrian authorities to put an end to arbitrary arrests and harassment of journalists, media workers and freedom of opinion and expression advocates.