So for some reason, people think that my existence in conferences is useful in a way. The so-called “Arab Spring” is getting a lot of NGOs rich, and these NGOs must get “involved” in the revolutions that have swept the Arab-speaking region in 2011.  Conferences love bloggers the most. The world still assumes that the revolution in Egypt was made by bloggers, and hence bloggers in Arab-speaking countries must be invited, because they must have some interesting role in their country, and not to mention how journalism always create “heroes” in every “crisis,” the Hollywood-style. I’ve said it many times on this blog and I am saying it again: “online activists are overrated,” and not just in Syria, but all over the MENA region. And the “social media + revolutions” is the stupidest and most irritating topic made by ignorant “experts.”

Anyways, I am now in Spain, attending some geeky conference were geeks talk about stuff I’ve heard so much about but still don’t get them. I am not here for the conference, I am here for Spain. Conferences give you a free ticket, food and a free bed (in Spain we are offered a free tent). This is my first time to Spain and it’s not going well so far for reasons I cannot talk about in a Syria ruled by the current criminal and monstrous regime. Nshalla in a free Syria (in few months so please wait up).

Today I was walking to a mall nearby to buy some stuff. Took my ipod with me and discovered this song that made it to my ipod in a way. 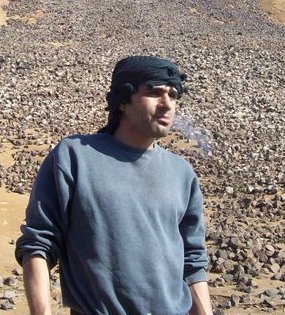 Assem Hamsho was kidnapped from the a cafe in Damascus along with his 11 friends. We met three days before his arrest. In detention he was badly tortured by regime people, as told by one the recently released detainees. He's still in detention.

So I remembered all of a sudden all the Syrians who should be here instead of me. Those who might have understood the weird conversations that are taking place during lunches and breaks. The Syrians who cannot come because they’re either killed, detained, hiding or banned from traveling.

Dramatic, I know. But I guess I do feel guilty every time I leave Syria and go to some place to enjoy tourism or shopping. Anyways, I also remembered martyr Ghiath Matar.

Giath Matar. Kidnapped from Darayya by regime thugs, delivered to his parents and pregnant wife three days later as a dead body. He was tortured to death.

I never met Ghiath. I only heard of him after he was tortured to death by the regime. His pictures are all over Syrian Facebook. But I heard a lot about Darayya, the city in Damascus Suburbs that made many activists in Damascus inspired, including me. A dear friend in Damascus was telling me about the religious and conservative Muslim Sunni activists in Darayya who were protected by Darayya Christians when the regime thugs attempt to attack the protesters. We all smiled, amazed, by the Giath Matar-and-Yahia Shurbaji peaceful initiative. These two wonderful Syrian activists who cannot be here in Spain today to tell the 600 people gathered in Granada one of the most inspiring stories in the Syrian revolution because one is killed and the other remains in detention.

I don’t remember when it happened, I think it was in the fourth month of the revolution when the army and regime’s security forces stormed the city of Darayya, activists responded with “message in a bottle” thrown in the face of the army. Inside the bottle there is a flower and a letter to the army that says something like: we want our freedom, you are not our enemy, we have one enemy and it’s the dictator. The army actually retreated. The soldiers who were pointing their rifles in the face of those protesters and activists put down their guns and retreated. But regime’s thugs and security forces did not. They broke the bottles and smashed the flowers with their foot. Still, all of Syria knew the story of how religious and conservative Darayya activists addressed the Syrian army, and how the Syrian army retreated. 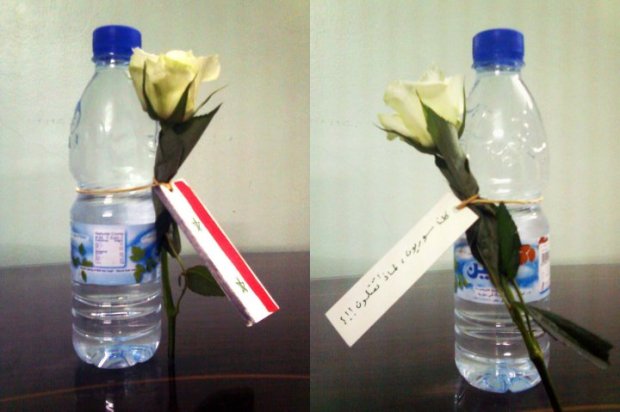 Bottles thrown by peaceful activists in Darayya to the Syrian army. The Syrian army retreated after reading the messages inside.

“These stories don’t mean anything when you’ve got no one to tell them to.” Still, Yahia Sharbaji who is the genius behind this peaceful initiative is still in detention and God knows what they’re doing to him. Ghiath Matar is tortured for three days and was delivered dead to his family. It’s true, the Syrian regime is that monstrous. 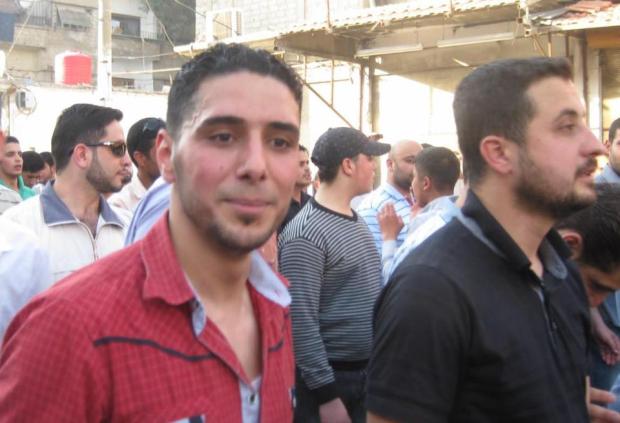 On the left is martyr Giath Matar, and on the right is detained Yahia Shurbaji.

I can’t seem to know how to end this post. All I wanted to say is that I remember the story, and all I can do is tell it to you. I haven’t met Ghiath Matar but I cannot forgive nor forget. Do you understand, that I was scared to protest, but now I am no longer scared? Do you understand that I was scared of detention and now we don’t even think about it? “Fuck it all. My people are being killed,” is what everyone is saying. Amazing wonderful people are being killed by a trash supported by Hezbolla, Iran and the [some] disgusting pro-Palestinian Lebanese/American leftist activists. To those people I say: I spit on you, “comrades.” I spit on your “intellect,” your “sense of justice,” and on your very “free voice.” I spit on each of you. This regime will fall and you so-called “pro- Palestinian activists” will be next. Hezbolla is over. It’s time for people’s self-determination to rule the region, you just wait and watch.