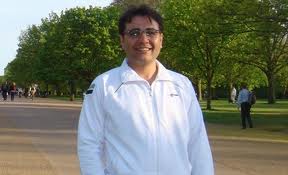 The 32 year-old blogger was kidnapped in Damascus in an ambush on 24-10-2011 and was taken to security services branches in Al-Khateeb and Kafaقsouseh, then was transferred to Adra prison, a prison that is considered by activists and revolutionaries as “haven” in comparison to security services, or worse, Air Intelligence service- a place where worst kinds of torture is practiced against detainees.

In Adra prison, you can make a phone call, you can order food in, you’re allowed to have visitors, and have friends or family members to bring you money and clothes. But what’s most important about Adra prison, is that you meet new revolutionaries, make new friends, and certainly, give each other support. Some prisoners were brought in the summer, so they’re still in summer clothes, and it’s freezing in Damascus, that’s why revolutionaries don’t take their clothes with them on the day of their release, they hand their clothes and stuff to other imprisoned revolutionaries.

Hussein Ghrer is now free, he’s back to his wife, who worked tirelessly to get him out, a brave and amazing woman. Hussein is back to his two children, I keep forgetting how old they are, Ward and Zain, one is 3 years old and the other is almost one year old. Ward, the older son, was asking about his father a lot lately, and his mother was telling him: “your father is traveling, but he’ll bring you nice gifts.” The son was not impressed, “I just want him home.”

Hussein is going to be home tonight, where he will be holding his wife tight, and never let go of his two precious sons again. It’s all going to be alright, and it will all be over very soon.